The Diocese of Great Falls-Billings 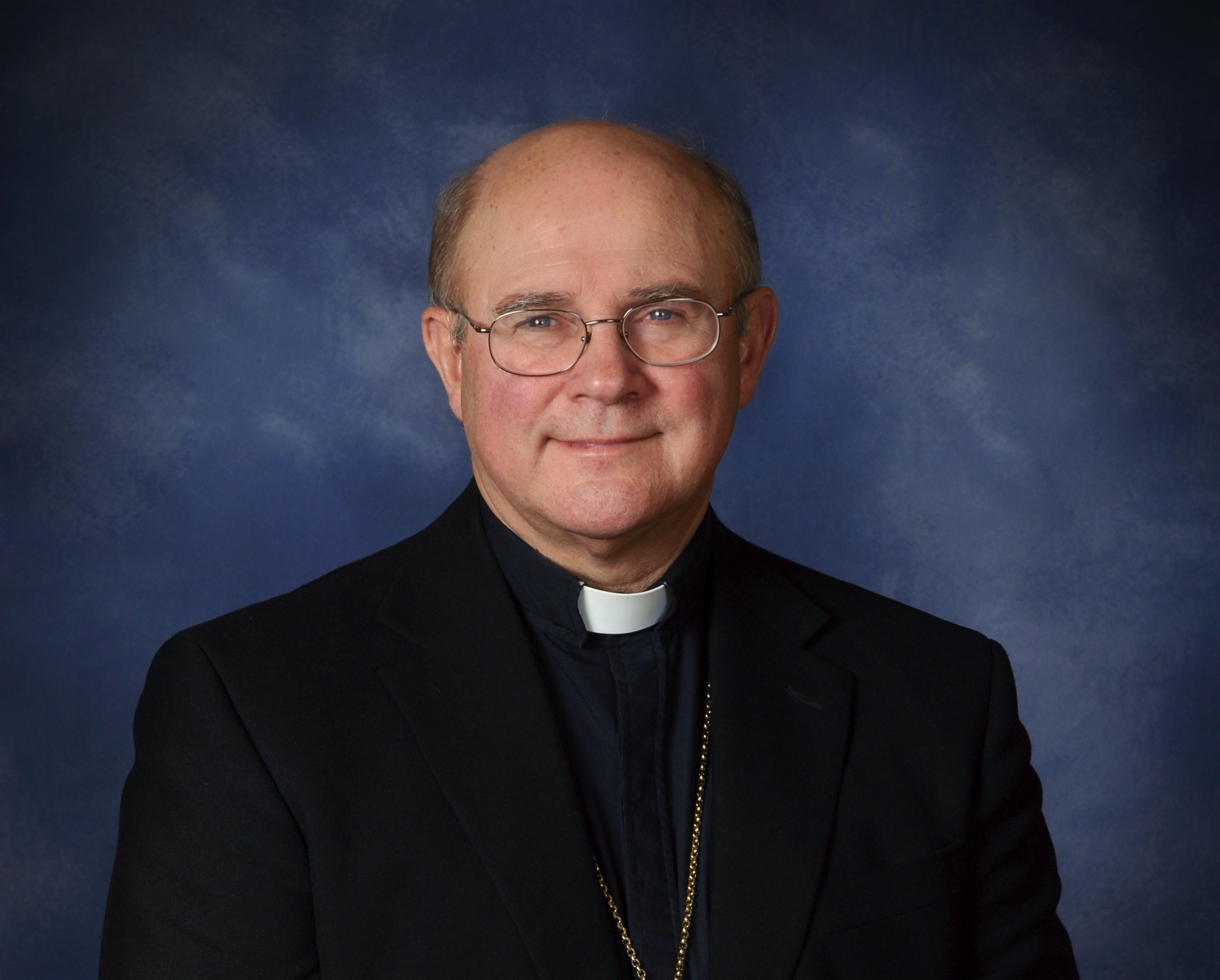 Michael Warfel was born in Elkhart, Indiana, and studied at Indiana University. He left his studies to enlist in the U.S. Army, serving 18 months in Vietnam and and 13 in Korea. He was honorably discharged in 1971 and entered St. Gregory’s College Seminary in Cincinnati, Ohio, as a seminarian for the Diocese of Fort Wayne/South Bend in 1972.

He attended St. Gregory’s College Seminary in Cincinnati, Ohio, earning a Bachelor of Arts degree in philosophy. He received a Master’s of Divinity from Mount St. Mary’s Seminary of the West and a Master’s in Theology from St. Michael’s College in Colchester, Vermont. He was ordained a priest for the Archdiocese of Anchorage by Archbishop Hurley on April 26, 1980.

On December 17, 1996, Michael William Warfel was ordained a bishop by Archbishop Hurley, and installed as the fourth Bishop of the Diocese of Juneau. While Bishop of Juneau, he served as Apostolic Administrator for the Diocese of Fairbanks from Oct. 2001 to June of 2002.

Bishop Warfel was appointed as the 8th Bishop of the Diocese of Great Falls-Billings on November 20, 2007, and installed on January 16, 2008.

Coat of Arms of His Excellency, The Most Reverend Michael William Warfel, Bishop of Great Falls-Billings 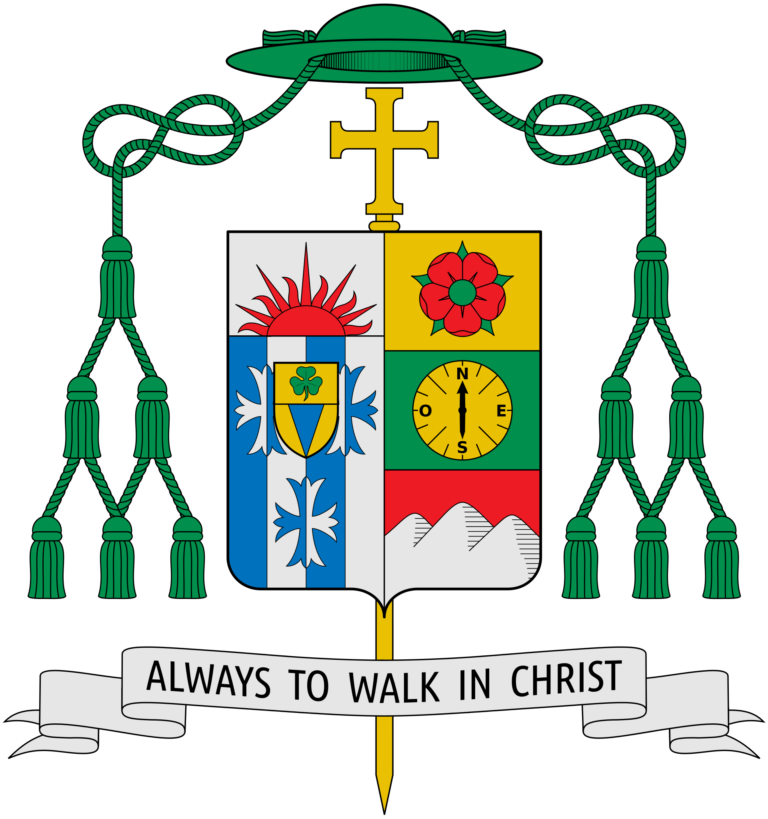 Motto
“Always to Walk in Christ”

As one who enjoys the outdoor world as much as Bishop Warfel, it is no wonder that he would select a phrase like “Always to Walk In Christ,” as his episcopal motto.  In this phrase, His Excellency expresses deep belief that in all that we do, as we walk our path of life, we are to do so with Christ to guide us.

As the local bishop of a diocese, heraldic tradition dictates that the Ordinary’s personal arms are to be joined (impaled) with the arms of his Diocese to symbolize that the Bishop is the personification of the Diocese. This “marriage” is additionally symbolized by the ring, which the Bishop wears.

Customarily the dexter impalement (left side of the shield) is given over to the arms of jurisdiction, in this case the Diocese of Great Falls-Billings.  The Diocesan crest is composed of a main section that occupies the bottom two-thirds of the shield. This section of the shield is divided into four vertical sections, known as pales, of alternating blue and silver (white). These four sections are in the traditional heraldic colors of water and have straight edges to give the illusion of water falling rapidly from a great height and thus reflects the name of the prime See City of Great Falls. On these four pales are three crosses that are counter-changed, divided and colored opposite their background, to honor the Most Blessed Trinity. The upper one-third of the shield, known as a chief, is silver (white) on which is displayed a red demi-sun, to reflect the fact that the See City of Great Falls is located opposite the mouth of the Sun River. These have been the arms of the Diocese of Great Falls since it was erected on May 18, 1904.

In June of 1980, the Diocese of Great Falls became a dual See City diocese, now known as the Diocese of Great Falls-Billings, reflecting the growth of this region of Montana. To commemorate this change in the status of the diocese, an escutcheon, a small shield placed within the larger design, has been added to the former arms of the diocese. This smaller shield is divided into two halves, across the middle. The upper portion is gold (yellow) on which is placed a green trefoil, a three-petal flower, which is the heraldic representation of the shamrock, to honor Saint Patrick, titular of the Co-Cathedral in Billings. The lower portion is also gold and on this field is placed a blue pile; a “V”-shaped charge. If this section is looked at alone, the gold sides that are left by cutting out the blue pile, gives the illusion of the “rim-rocks”, the cliffs that surround the city of Billings.

For his personal arms, His Excellency has adopted a design that reflects his heritage and his life as a priest.  These arms are composed of three sections that are gold, green and red—the colors of the national flag of Lithuania—and by use of these colors honors his heritage.

In the upper portion of the design is a red rose that has its leaves and barbs in green.  This rose is used to honor Our Lady of Guadalupe.  By use of this rose, His Excellency expresses his deep devotion to Mary, Our Mother, who will be and who is our protector and guide.

In the lower portion of the design are seen three silver mountains to signify the city of Juneau.  The mountains are significant because Juneau is land-locked with no way in or out except by air or by sea.  In the third, the center portion, is a gold mariner’s compass, which is the most important piece of equipment for any person in the outdoors, especially those who love the Bishop’s favorite recreational activity, that of hiking and backpacking.

Report Abuse by a Bishop